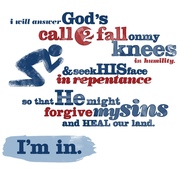 Call 2 Fall is a nationwide prayer effort that takes place in churches and homes across America each year on the Sunday closest to Independence Day, the 4th of July. It was inititated in 2009 by Tony Perkins and the Pastors Council associated with the Family Research Council's (FRC) Watchmen on the Wall initiative.

Watchman on the Wall is a network churches whose pastors have pledged 1) to Pray and to teach their churches how to pray; 2) to Preach God's word as it applies to the important issues of our day that are being debated in the public square, and 3) to partner with other pastors in their communities and states to pray together and to exercise leadership beyond their walls of their local church when the moral leadership of the church is needed (a need that is increasingly obvious in our day).

The Call 2 Fall Declaration comes from the well known Scripture:

"If my people, who are called by my name, will humble themselves and pray and seek my face and turn from their wicked ways, then will I hear from heaven and will forgive their sin and will heal their land" (2 Chronicles 7:14).

Our nation's journey back to God and His forgiveness, cleansing, healing and blessing, begins with those who believe, taking to their knees in humility and repentant prayer. Consider the words of the Declaration prayerfully:

"I will answer God's call to fall on my knees in humility and seek His face in repentance so that He might forgive my sins and heal our land."

Call 2 Fall was birthed, in part from the memory of the days prayer that preceeded America's Independence, one such day in particular.

From the time of the Pilgrims, colonial governors and legislatures issued hundreds of Prayer Proclamations, calling upon Americans to repent, fast and pray.

But on June 12, 1775, the Second Continental Congress called for an emergency day of public humiliation, fasting, and prayer throughout the Colonies for Thursday, July 20th, 1775. They called for work to cease, for church doors to be opened and for ministers to lead their congregations in prayer for our nation, then on the verge of a full scale war with Great Britain.

Patriot James Warren wrote his friend Samuel Adams: "Three millions of people on their knees at once, supplicating the aid of Heaven, is a striking circumstance, and a very singular one in America . May the blessings of Heaven follow in answer to our prayers..."

Their prayers were heard.” When the Declaration of Independence was signed in July, 1776, Samuel Adams exclaimed: "We have this day restored the Sovereign to Whom all men ought to be obedient. He reigns in heaven and from the rising to the setting of the sun, let His kingdom come."

But today, all is in jeopardy. We must pray as never before. We need extraordinary prayer today in our churches, and God is, indeed raising up a prayer movement across denominational lines. It is one of the brightest indicators of hope in our nation today.